Clone Mobile are arriving earlier than the real device and surely they are hurting the Mobile Manufacturers like Samsung, iPhone and HTC. Earlier iPhone 5 Clone which is available at price of $99 is arrived as Goophone i5s, then came Samsung Galaxy S4 Clone from Chinese Mobile Manufacture Sunle S400 cost only $220 and later HTC has also get its clone in the form of Star S5 Butterfly which seems as clone of HTC Butterfly and the latest member which gets entry into the cloned mobile phone market is the Neken N5. 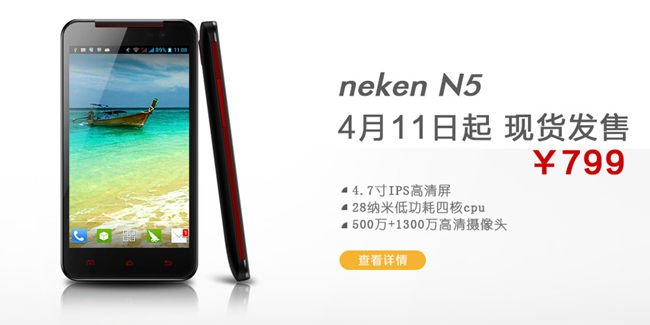 Neken N5 is a product of Chinese Mobile Manufacture Neken. It has 5.0 inch display screen and most of the hardware are same as that of earlier reviewed Clone of HTC Butterfly – Star S5 Butterfly Mobile but there are some differences and major difference is in the price of both the devices. Neken N5 cost about $128 whereas Star S5 price at $222.99. There is one more difference, Neken N5 has 13.0 MP rear and 5.0 MP front facing camera which looks really good. Earlier when I post about other clones I suggest you not to go for the clone mobile if you are getting another Mobile from India Manufacturer mainly due to the cost reason, but Neken N5 seems to be different in that aspect. If we convert $128 into Indian Rupees then Neken N5 will cost in India at Rs. 7,000/-(Approx.) which is very cheap if you look the specification of the device.

Neken N5 is expected to get launched somewhere between April in China and soon it be available for international retailers and buyers also.