Karbonn Smart Tab TA-FONE A37 Tablet, latest from company in the Smart Tab Range has been surfaced online for a price of Rs. 9,490 and it is available on Snapdeal. It has 7.0 inch capacitive touch display screen which can offer resolution up to 800×480 pixels. Karbonn has powered A37 Tablet with 1.0 GHz dual core processor which is supported by 512 MB RAM, this configuration allows you to play most of the games. It runs on Android Jelly Bean Version 4.1 Operating System from Google and supports DUAL SIM with 3G support, voice calling and SMS facility. Recently BSNL and Micromax have also launched their Voice calling tablet.

Karbonn Smart Tab TA-FONE A37 Tablet comes with 4GB of internal storage which can be expandable up to 32GB with MicroSD card. It has Dual camera, front facing camera of 3.0 MP VGA and a 2.0 MP rear camera, so you can make video calls from this tablet. Battery Capacity of Karboon A37 Tablet looks good with a 3,000mAh Battery which should the device for longer duration.

Karbonn Smart Tab TA-FONE A37 Tablet Price in India is Rs. 9,490/- INR and it is available on Snapdeal

Karbonn Smart Tab TA-FONE A34 Tablet is also a voice calling tablet from Karbonn just like A37, it has 7.0 inch display screen which can give screen resolution up to 800X480 pixels. There are certain features that are not present in A34 in comparison to A37 like the earlier one runs on Single Core processor which is clocked at cycle speeds of 1.0 GHZ and Android Ice Cream Sandwich Operating System version 4.0. It is also voice calling tablet but there is no 3G support in A34 but other facility are there like 2G Voice calling, SMS, and DUAL SIM. 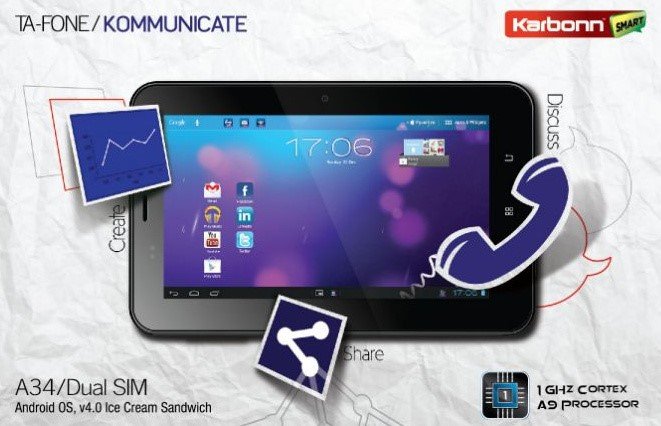